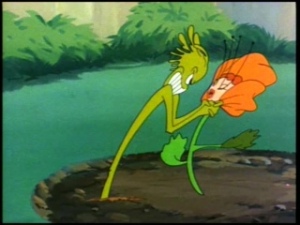 24 He presented another parable to them: “The kingdom of heaven may be compared to a man who sowed good seed in his field. 25 But while people were sleeping, his enemy came, sowed weeds among the wheat, and left. 26 When the plants sprouted and produced grain, then the weeds also appeared. 27 The landowner’s slaves came to him and said, ‘Master, didn’t you sow good seed in your field? Then where did the weeds come from?’

28 “‘An enemy did this!’ he told them. “‘So, do you want us to go and gather them up?’ the slaves asked him. 29 “‘No,’ he said. ‘When you gather up the weeds, you might also uproot the wheat with them. 30 Let both grow together until the harvest. At harvest time I’ll tell the reapers: Gather the weeds first and tie them in bundles to burn them, but store the wheat in my barn.’”

Where there’s wheat (believers) you better believe Satan will plant his weeds which are unbelievers, false teachers who will introduce doctrines of demons.

Weeds means a plant that is not valued where it is growing and is usually of vigorous growth; especially : one that tends to overgrow or choke out more desirable plants. Merriam-Webster

The sole purpose of Satan’s emissaries (weeds) is for the destruction of the Christian’s faith. Your destruction is Satan’s priority by any means necessary.
False teachers have no value in God’s sight but are the tools of the enemy to choke out the truth of scripture with lies by twisting and making it into a pretzel. There’s a lot of false teachings out there which rejects Jesus as being God, the Virgin birth, God existing as three persons and all three are that one God Yahweh and etc.

There are things in the Bible that’s not revealed fully in detail but what we cannot understand fully doesn’t make it false. For an example: How can God create the universe in six days and rested on the seventh, My finite mind cannot comprehend God’s omnipotence how He did it with His spoken word but I believe it because the Word of God is Truth. How can God be one but at the same time manifest Himself as the Father, Son and the Holy Spirit. My finite mind cannot comprehend but I believe it because it is revealed in scripture and God cannot lie (Numbers 23:19). Yahweh is called God (Psalms 100:3), Jesus is called God (John 1:1,14), and in Acts 5 the Holy Spirit is called God. In Jesus’ baptism all three were present (Matthew 3:15-17) so how can God be three persons but at the same time all three are that same God? God is revealed as a Triune God and that’s what I believe because I acknowledge that my finite mind cannot fully comprehend the totality of God. False doctrine is like weed and its sole purpose is to kill the truth. We must be students of the Bible so when false doctrine or like 1 Timothy 4: 1-3 calls it “teachings of demons” come your way, you can avoid its deception entering into your heart by a filter of Truth that one acquires through reading the Word daily.