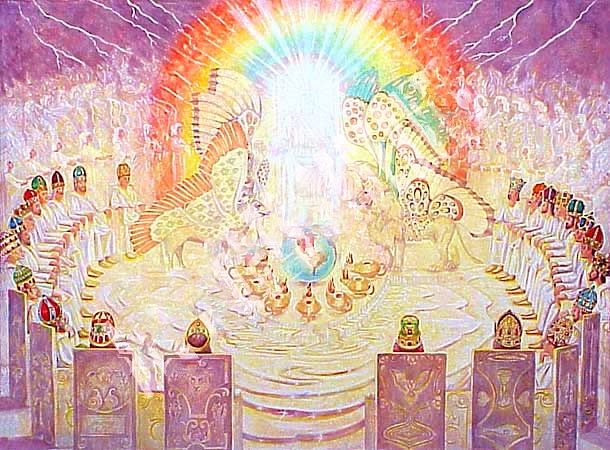 1 After this I looked, and there in heaven was an open door. The first voice that I had heard speaking to me like a trumpet said, “Come up here, and I will show you what must take place after this.”

The phrase “open door” seems to indicate access to the throne room of God.

The voice that John heard is not revealed who it was but most likely was an angel since he was sent by Christ to show John all that must take place.

2 Immediately I was in the Spirit, and a throne was set there in heaven. One was seated on the throne,

The word Spirit could refer to his spirit or that the Holy Spirit took his spirit to see the spiritual revelation from Jesus Christ.

Throne here refers to God who is ruler over the heavens and the earth with all power and wisdom.

John finds himself in the throne room of God.

3 and the One seated looked like jasper and carnelian stone. A rainbow that looked like an emerald surrounded the throne.

God’s appearance is so magnificent that He resembles precious stones with His glorious light who lights up His throne room.

The rainbow being in His throne means that He never forgets His promises and in this case was the promise that is found in Genesis 9:13 which says, “I have set my rainbow in the clouds, and it will be the sign of the covenant between me and the earth.”

4 Around that throne were 24 thrones, and on the thrones sat 24 elders dressed in white clothes, with gold crowns on their heads.

The 24 elders who sat on thrones wearing gold crowns are not angels but believers (Revelation 3:21).

White clothes-Revelation 6:11 So a white robe was given to each of them, and they were told to rest a little while longer until the number would be completed of their fellow slaves and their brothers, who were going to be killed just as they had been.

Gold crown- 2 Timothy 4:8 There is reserved for me in the future the crown of righteousness, which the Lord, the righteous Judge, will give me on that day, and not only to me, but to all those who have loved His appearing.

Who are the 24 elders seated with the Lord? No one knows but the Lord and those positions are already assigned by God. We see this when two disciples of Jesus asks to sit on thrones next to Him and this is what He said in Mark 10:40 which says, “But to sit at My right or left is not Mine to give; instead, it is for those it has been prepared for.”

5 Flashes of lightning and rumblings of thunder came from the throne. Seven fiery torches were burning before the throne, which are the seven spirits of God.

The phrase “Flashes of lightning and rumblings of thunder” refers to God’s power.

“Seven fiery torches and seven spirits of God” both phrases refer to the same person, the Holy Spirit.