Skip to content
SpaniardVIII Verse By Verse Through Revelation August 28, 2017May 22, 2022 3 Minutes 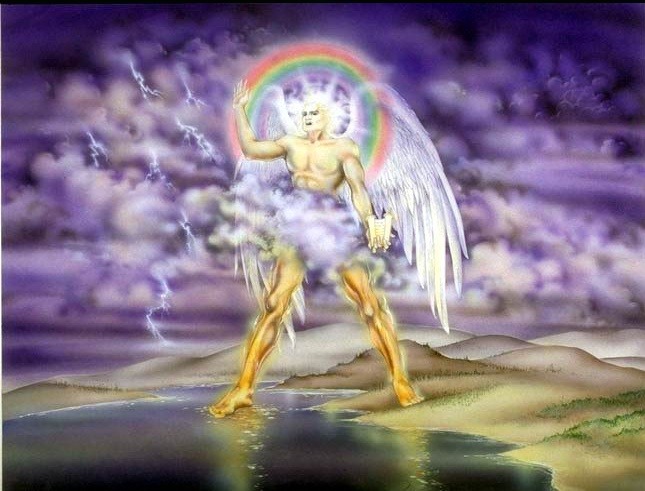 1 Then I saw another mighty angel coming down from heaven, surrounded by a cloud, with a rainbow over his head. His face was like the sun, his legs were like fiery pillars,

The Greek word for mighty is a reference to physical strength with great power.

This mighty angel mirrors the appearance of the Lord by having a cloud, a rainbow (Ezekiel 1:28), shining like the sun, and his legs being fiery pillars.

Scripture reveals that angels can have some of Jesus’ appearances or reflections since they are in God’s presence. An example of an angel that is described pretty close to how Jesus looks like in Revelation is found in Daniel 10:5-6 which says, 5 I looked up, and there was a man dressed in linen, with a belt of gold from Uphaz around his waist. 6 His body was like topaz, his face like the brilliance of lightning, his eyes like flaming torches, his arms and feet like the gleam of polished bronze, and the sound of his words like the sound of a multitude.

In the same chapter, it reveals that he is not a pre-incarnate Jesus because of verse 13 which says, But the prince of the kingdom of Persia opposed me for 21 days. Then Michael, one of the chief princes, came to help me after I had been left there with the kings of Persia.

The angel was attacked by a huge and powerful demonic army. Michael the archangel had to come down and help the angel to get out of the battle so he can go to Daniel and give him the message from the Lord. If it was a pre-incarnate Christ, one spoken word the demons would have left immediately. Jesus does not need help because He is all-powerful.

Back to the mighty angel, nowhere in the Book of Revelation is Jesus called an angel but is revealed as the Alpha and Omega, who is God. As we can see in Daniel angels can have a close resemblance to Jesus but the title is what exhibits who it’s talking about.

2 and he had a little scroll opened in his hand. He put his right foot on the sea, his left on the land,

The phrase “right foot on the sea, his left on the land” could refer to the judgments that are going to occur on land and sea.

3 and he cried out with a loud voice like a roaring lion. When he cried out, the seven thunders spoke with their voices.

“voice like a roaring lion” shows that the angel’s power could even be heard.

The seven thunders could refer to God speaking since seven is God’s number which means completion in Genesis 1.

This verse is a mystery because nowhere in Revelation does it explain why John was prohibited from writing what the seven thunders said. One of the reasons could be why it is not revealed is because there are some things that are only meant for God to know as seen in Deuteronomy 29:29 which says, The hidden things belong to the LORD our God, but the revealed things belong to us and our children forever, so that we may follow all the words of this law.”

5 Then the angel that I had seen standing on the sea and on the land raised his right hand to heaven.

Here is another reason why this angel is not Jesus—raising his right hand signifies swearing by someone greater than himself.