Skip to content
SpaniardVIII Verse By Verse Through Revelation December 29, 2018May 22, 2022 3 Minutes 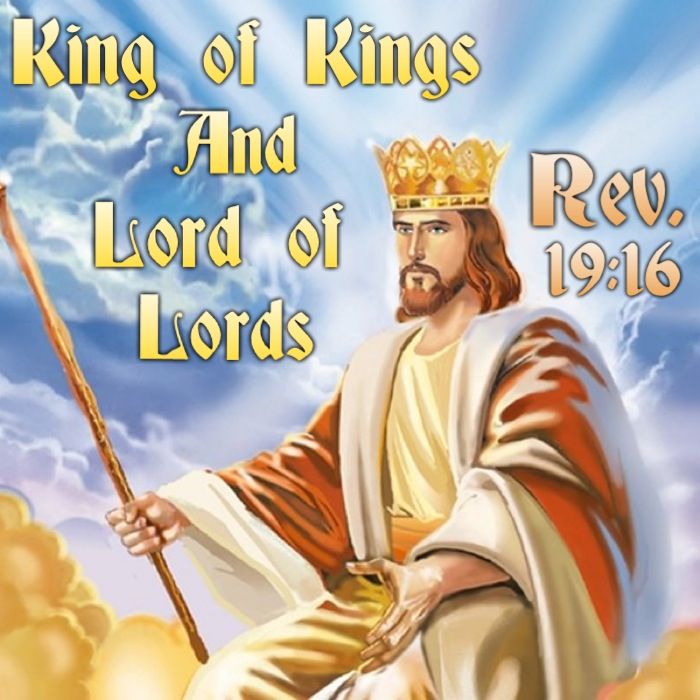 16 And he has a name written on his robe and on his thigh: King of Kings and Lord of Lords.

The name or title that Jesus has reveals who He is. He is the ultimate King, not only on earth but the universe for He created it.

The name: KING OF KINGS AND LORD OF LORDS is a title that only belongs to Yahweh as seen in:

15 God will bring this about in his own time. He is the blessed and only Sovereign, the King of kings, and the Lord of lords

17 For the LORD your God is the God of gods and Lord of lords, the great, mighty, and awe-inspiring God, showing no partiality and taking no bribe.

According to verse 16, Jesus is Yahweh, God the Son.

For further study about the Trinity click here: The Trinity

17 Then I saw an angel standing in the sun, and he called out in a loud voice, saying to all the birds flying high overhead, “Come, gather together for the great supper of God,

The army that came against Jesus Christ and His army was going to be decimated.

The site of birds feeding on a great army will show the spectators that those who go against the Living God shall not prevail.

This war will occur at the seconding coming of Christ. The antichrist will try to stop Jesus from becoming King of kings and Lord of lords on earth.

These men will comprise, those who have the lowest rank in the military to those who rule over their nation. Money and human power cannot compare with the power of the Almighty.

19 Then I saw the beast, the kings of the earth, and their armies gathered together to wage war against the rider on the horse and against his army.

the rider on the horse and against his army points back to verse 11, which is Jesus Christ who comes with the saints (1 Thessalonians 3:13).

20 But the beast was taken prisoner, and along with it the false prophet, who had performed the signs in its presence. He deceived those who accepted the mark of the beast and those who worshiped its image with these signs. Both of them were thrown alive into the lake of fire that burns with sulfur.

After the defeat of the antichrist and his army, Jesus will take him and his false prophet and throw them alive into the Lake of fire where the fire does not die and their smoke will ascend forever and ever.

Those whom he deceived by receiving his mark (the mark of the beast) must also worship his image. The worship of the image is done by bowing down in submission to his commands and rules and their fate shall be as that of the beast and his false prophet.

21 The rest were killed with the sword that came from the mouth of the rider on the horse, and all the birds ate their fill of their flesh.