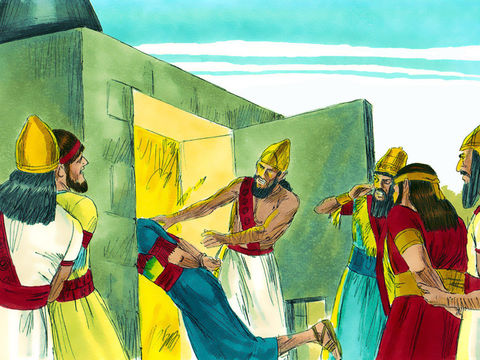 Daniel’s three friends refused to bow down and worship the golden statue. They rather die than abandon the Living God. That is a picture of true faith. In the end, God protected them from being consumed in the fire, and they came out unharmed.

12 See to it, brothers, that none of you has a wicked heart of unbelief that turns away from the living God.

A Christian will only be known by his faith, a faith of endurance. Many people in the Christian community can say that they belong to Christ, but the question becomes, can their faith endure extreme heat, a heat that burns anything that is not gold, silver, and bronze? Faith is like a precious metal that only gets better when the fire is burning it.

A hollow faith in Jesus Christ is constructed of wood, hay, or straw, and that type of faith will not last in the time of testing. A person with that faith will apostatize and will stop following Jesus Christ. Those are the ones that never were saved in the first place, as seen in 1 John 2:19, which says, “19 They went out from us, but they did not belong to us. For if they had belonged to us, they would have remained with us. But their departure made it clear that none of them belonged to us.”

Time will tell what type of faith a professing believer claims to have. Many fake ones testify that they found the truth apart from Jesus Christ into atheism. Of course, they would leave, since they never had real faith, it burned up at the time of their testing. And where did they go? To atheism, where they can wallow in unrestrained sin and still think, with a twisted mind, that they are somehow good people. What is their standard? Themselves. These people are used by the devil to go into Christian sites to harass and try to dismantle their faith like theirs were, but that will never happen.

Atheism is one of the most baseless beliefs out there, yet, those who don’t know God’s Word can fall into that trap. The Scripture grounds a believer’s faith firm. Never, ever depart from sound doctrine and especially from believing in the inerrancy of Holy Scripture because it will destroy your faith if you do. A true Christian will believe every word of Scripture, just like Jesus, when He said in John 10:35 “35 If he called them gods to whom the word of God came—and the Scripture cannot be broken.“

The Greek word for “broken” means destroyed. The truth of God’s Word can never be tampered, to the point where we don’t have it any longer. In 1 Peter 1, it makes it very clear that the Gospel [the Scriptures] is imperishable.

23 For you have been born again, not of perishable seed, but of imperishable, through the living and enduring word of God. 24 For, “All flesh is like grass, and all its glory like the flowers of the field; the grass withers and the flowers fall, 25 but the word of the Lord stands forever.” And this is the word that was proclaimed to you.

We can trust that we have all of God’s Word in our hands, and know that the enemy will stop at nothing to take that trust away from you by any means necessary. Stand firm in the Word of God, and you won’t be moved.