The word “water” in the passage refers to the Holy Spirit.

“But whoever drinks some of the water that I will give him” Refers to placing one’s faith in Jesus for eternal life.

“never be thirsty again” Means that the person who has the Holy Spirit will never lose their salvation.

“will become in him a fountain of water springing up to eternal life.” A fountain continues with its water because of the depth of its source. But our salvation will continue because the source of eternal life does not spring up from us but from the Spirit of God who lives in us, whose power is endless.

10 when he comes in that day to be glorified in his saints, and to be admired among all those who have believed, because our testimony to you was believed.

“when he comes in that day” The day that it is referring to is the 2nd coming of our Lord and Savior, Jesus Christ who is going to reign for 1000 years on earth.

“to be glorified in his saints” Suggests that the saints [Christians] will acknowledge Jesus’ status as Creator, Sustainer, Savior, the Christ, and Yahweh when He returns.

“and to be admired among all those who have believed” To be in awe of His glory, which will reveal the love that all believers have for Jesus and for His redemption. 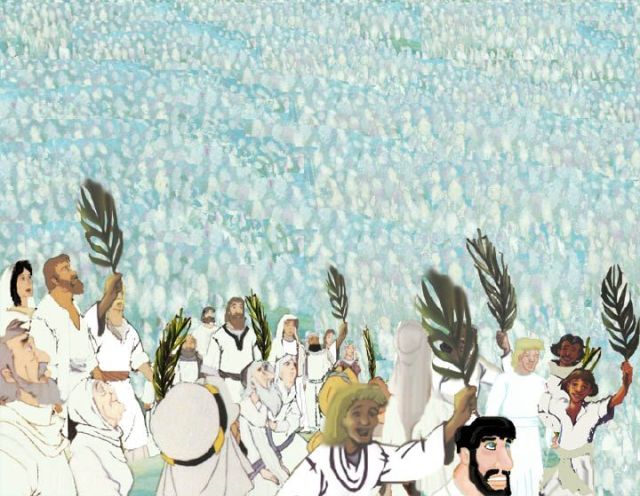 9 After this I looked, and there was a vast multitude from every nation, tribe, people, and language, which no one could number, standing before the throne and before the Lamb. They were robed in white with palm branches in their hands.

The scene takes place in heaven:
The vast multitude from every nationality are people who gave their lives to Jesus Christ and suffered for His name sake.

Robed in white means righteousness, their sins through faith in Jesus have been forgiven.

Palm branches mean to glorify and declare that Jesus is their King as seen in John 12:13 which says, They took palm branches and went out to meet him, shouting, “Hosanna!” “Blessed is he who comes in the name of the Lord!” “Blessed is the king of Israel!”

10 And they cried out in a loud voice:
Salvation belongs to our God,
who is seated on the throne,
and to the Lamb!

They were praising the Lamb of God who has given them eternal life, just like the word Hosanna in John 12:13 which means save so they in heaven are praising God because He has saved them from their sins and eternal hell.

11 All the angels stood around the throne, the elders, and the four living creatures, and they fell facedown before the throne and worshiped God,

All the hosts of heaven worship God which Jesus is included as verse 10 attributes salvation coming from the Father and the Son.

12 saying:
Amen! Blessing and glory and wisdom
and thanksgiving and honor
and power and strength
be to our God forever and ever. Amen.

Only God alone (the Father, Son, and Holy Spirit) deserves praises from us. No one else contains the attributes that are described in verse 12 but God alone.

13 Then one of the elders asked me, “Who are these people robed in white, and where did they come from?”

The phrase “Then one of the elders” see notes in Revelation 4:4.
The question from the elder was rhetorical, making John realize that the elder did know because he was seated by Jesus Christ. Only those that are close to Jesus in their walk will know God’s Word

I personally think that when we get closer to Christ through prayer and reading of His Word, the Lord will give us the understanding to put to shame those whom the world deems wise so that they may see that it isn’t our wisdom but God’s.

98 Your commands make me wiser than my enemies, for they are always with me.