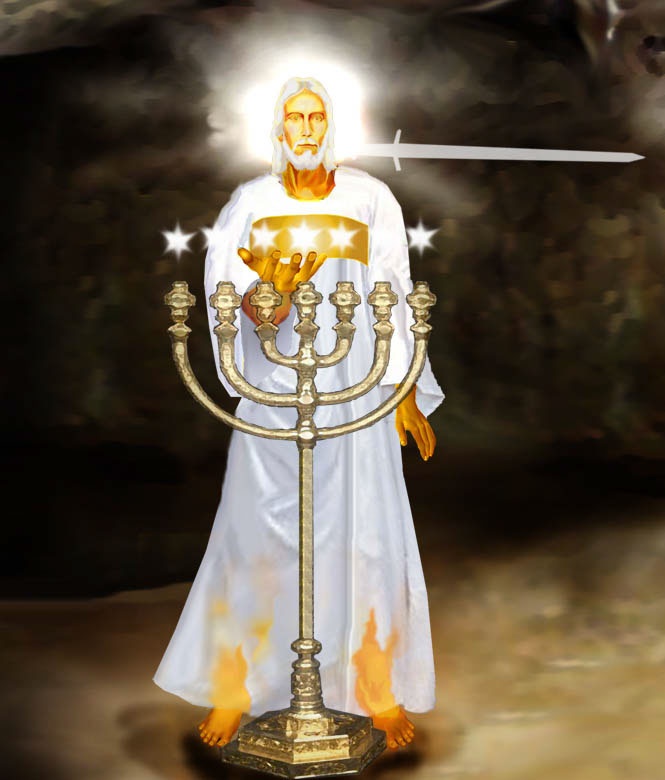 16 In his right hand he held seven stars, and coming out of his mouth was a sharp, double-edged sword. His face was like the sun shining in all its brilliance.

The seven stars represent seven angels that are assigned to the churches mentioned in verse 11. The angels can be literal or may mean human messengers who are sent to the churches like the Greek word for angels could mean. I personally believe that it refers to real angels because of Hebrews 1:14 which says,  14 Are not all angels ministering spirits sent to serve those who will inherit salvation?

The phrase “and coming out of his mouth was a sharp, double-edged sword”, refers to His Word as seen in Hebrews 4:12 which says, 12 For the word of God is alive and active. Sharper than any double-edged sword, it penetrates even to dividing soul and spirit, joints and marrow; it judges the thoughts and attitudes of the heart. Through God’s Word Jesus defeated Satan in the wilderness (Matthew 4) and likewise in the future, see Revelation 19:15-21.

Jesus’ face shining like the sun reveals His divine nature because it is attributed only to God. An example of this is seen in Psalms 84:11 which says, For the LORD God is a sun and shield; the LORD bestows favor and honor; no good thing does he withhold from those whose walk is blameless.

17 When I saw him, I fell at his feet as though dead. Then he placed his right hand on me and said: “Do not be afraid. I am the First and the Last.

Jesus’ presence is so powerful that it shows how weak we really are. It is also a picture of our sinful nature that only Jesus can make us alive again through faith in Him. In the phrase “I am the First and the Last”, Jesus is declaring to be God, see the commentary on verse 8.

18 I am the Living One; I was dead, and now look, I am alive for ever and ever! And I hold the keys of death and Hades.

Jesus identifies Himself as the one who died on the cross and proclaims His resurrection so that we may know that our faith in Him is not based on a dead man but on one who lives and is eternal. We can be assured that after we die, believing in Jesus, we will live because He lives.

The phrase “And I hold the keys of death and Hades” Jesus is the only one with the authority to send someone to hell or heaven, depending on if the person has trusted in Him or not.

19 “Write, therefore, what you have seen, what is now and what will take place later.

Jesus tells John to write down the vision that He is showing him so that the churches may know where their spiritual growth is at, and what will take place in the future.

Jesus is the only one who can reveal mysteries and give one knowledge and understanding of His Word. The angels are sent to God’s churches to protect those who have eternal life (see Matthew 18:10 and Hebrews 1:14).

22 They came to Bethsaida, and some people brought a blind man and begged Jesus to touch him. 23 He took the blind man by the hand and led him outside the village. When he had spit on the man’s eyes and put his hands on him, Jesus asked, “Do you see anything?”
24 He looked up and said, “I see people; they look like trees walking around.”
25 Once more Jesus put his hands on the man’s eyes. Then his eyes were opened, his sight was restored, and he saw everything clearly.

Why couldn’t Jesus heal the blind man on the first try? Context, especially in this incident, plays a pivotal role. Let’s take a look and see the verses before the healing of the blind man took place.

14 The disciples had forgotten to bring bread, except for one loaf they had with them in the boat. 15 “Be careful,” Jesus warned them. “Watch out for the yeast of the Pharisees and that of Herod.”
16 They discussed this with one another and said, “It is because we have no bread.”
17 Aware of their discussion, Jesus asked them: “Why are you talking about having no bread? Do you still not see or understand? Are your hearts hardened? 18 Do you have eyes but fail to see, and ears but fail to hear? And don’t you remember? 19 When I broke the five loaves for the five thousand, how many basketfuls of pieces did you pick up?”
“Twelve,” they replied.
20 “And when I broke the seven loaves for the four thousand, how many basketfuls of pieces did you pick up?”
They answered, “Seven.”
21 He said to them, “Do you still not understand?”

Jesus was trying to teach His disciples what was happening to them in their understanding of God’s Word. Jesus’ healing of the blind man was purposely made in two stages to show His disciples that they were on the first stage like the blind man. In the first stage, the blind man only saw partially but not clear. Jesus’ disciples at the moment only understood partly what Jesus was teaching them. The second stage of the blind’s man healing was to show the disciples that ultimately on the day of Pentecost (Acts 2) after they would receive the Holy Spirit they will understand everything that Jesus had taught them as seen in John 14:26 which says, But the Advocate, the Holy Spirit, whom the Father will send in my name, will teach you all things and will remind you of everything I have said to you. The process of the blind man’s healing was to show them where they were at but He was assuring them through the end result of the man’s healing that they wouldn’t stay with limited understanding for a long time.