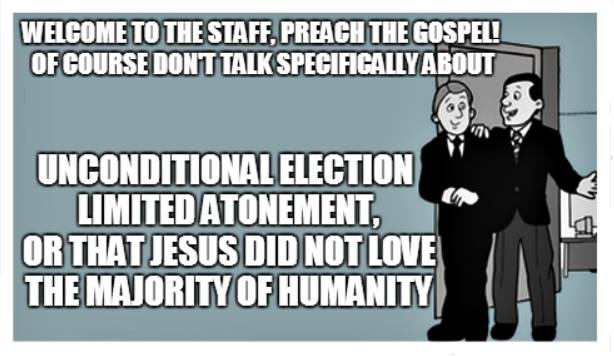 I came across two Calvinists that claimed something so horrific that it made me gasp. I have never thought that’s what that group believed. I would like to share this without naming them out of respect. Why do Calvinists hold to John Calvin and his teachings above the Holy Spirit’s? I’m going, to be honest, it seems like they worship the man even though they never have said that of course but their action to defend the man seems to me like if he was the one who died for their sins. All they talk about is him and less of Christ.

If you go to their site all they post are quotes from famous Calvinists as if it was inspired, it blows my mind. Why not talk about Jesus, his love for humanity? I think they don’t as much because they teach that Jesus only died for some and the others He didn’t. What’s the picture of God’s love? It is the cross, right? Well, if Jesus only died for the elect that means that He didn’t love the rest, that would be the logical conclusion.

That teaching does not come from God, I can be 100% sure in saying that Jesus loves everyone in the world as John 3:16 so beautifully says. Below are their quotes and it disturbed me so much that I wanted to share it so you can witness for yourselves what’s in their hearts which I truly believe is a rejection of the Holy Spirit. I will not paint all Calvinism with a broad brush but a lot of them I believe are deceived. Also, they will always tell you that if you don’t believe in their doctrine that you are an Arminian. I reject wholeheartedly that name because I haven’t studied or learned from him.

A Calvinist said–“But it’s necessary to test everything they teach by the Word of God – we’re commanded to test everything. The Holy Spirit also teaches us and leads us through His Word directly, though no prophecy is of private interpretation. We should never cling to teachers who are human and err, but only to Jesus Christ. However we can err by believing only in the Holy Spirit to guide us.”

Another Calvinist said–“A cult group called The Last Reformation is a fine example of following the “Holy Spirit” without other teachers to help in knowing if it is, in truth, the Holy Spirit doing the teaching. Discernment is an exercise which requires much study in the Word of God and by commentaries through His gift of godly learned men.”

This Calvinist claims that discernment (knowing the scriptures) can only be achieved by men’s commentaries, not by the Holy Spirit. Do you see anything wrong with that belief? This is not from Jesus but from Satan who will do anything to keep you away from knowing the truth which by the way is only revealed by the Holy Spirit (John 16:13)

As you can see in both quotes, how they speak from two sides of the same mouth which scripture says not to do this.

Praising and cursing come out of the same mouth. My brothers, these things should not be this way.

They are praising the Lord then turn around in the next sentence and curse the Holy Spirit by saying not to listen to Him alone because you can err as if the Holy Spirit can mislead you. This to me is very demonic without any doubt. They claim that if you believe and attend a church that does not follow John Calvin’s doctrine and only the Holy Spirit then you are characterized as a cult member.

What does the Bible say about the Holy Spirit?

When the Spirit of truth comes, He will guide you into all the truth. For He will not speak on His own, but He will speak whatever He hears. He will also declare to you what is to come.

27 The anointing you received from Him remains in you, and you don’t need anyone to teach you. Instead, His anointing teaches you about all things and is true and is not a lie; just as He has taught you, remain in Him.

The Holy Spirit warned us in 1 Timothy that some will depart from the truth by going after strange doctrines through false teachers instead of listening to Him who is our teacher, they heap on themselves doctrines of demons. See below.

Now the Spirit explicitly says that in later times some will depart from the faith, paying attention to deceitful spirits and the teachings of demons

When you reject the Holy Spirit’s teachings you will accept the teachings of demons.

I’m not saying that we don’t need teachers, but the Bible does tell us to judge them through scripture to make sure they are from God (1 Thessalonians 5:21, 1 Corinthians 14:29).

A Pastor’s job is to remind us to continue in the faith and teach us scripture. They are not there to dictate the final meaning of any particular verse and interpretation without any question. Teachers are to help us seek the Lord more by encouraging us to do our own study.

Is that what Calvinism does? Do they not follow the man’s interpretation as it is the only true interpretation? As if John Calvin was the only man who knew the real truth, that folks, is ridiculous.

I believe that some of his teachings are pushing people away from Jesus Christ and those who are Calvinists might not even be saved because they believe that before you can have faith in Jesus He has to save you first. They claim that you are so spiritually dead that you cannot choose to have faith in Jesus even if the Holy Spirit convicts and reveals the truth to you. That my friends contradict Ephesians 2:8-9. The more I dig deep into their doctrine, the more I get horrified. May the Lord Jesus Christ have mercy on them and bring them out so that they can follow Jesus alone not John Calvin.

One last thought. They remind me a lot of Catholicism because just as Catholics they adhere to someone’s interpretation as being final. The Calvinists claim scripture alone but that’s a lie because they understand the Bible through the eyes of Calvin just like the Catholics through the eyes of the Popes and Priests. What’s the difference between John Calvin and Catholicism’s Papal infallibility (everything that comes out of the pope’s mouth is free of error and therefore authoritative)? There is no difference in Calvinism. They will claim that Calvin is not perfect yet at the same time they defend his teachings as if it was perfect.

The desire of my heart is to reveal Satan’s tactics and how one can overcome his schemes and lies. I want to encourage you [as a follower of Jesus Christ] to fight the good fight of faith. Putting on the full armor of God, by way of reading the Word of God and praying every day so that you may be strengthened in the Lord and be transformed into the image of Christ Jesus for good works. View all posts by SpaniardVIII

9 thoughts on “From Whom Does The Gospel Come From John Calvin Or The Holy Spirit?”

Click on the link to know: What is behind magic books and the occult?

A Devotion on the deity of Jesus Christ

Bringing an idol into your home, a religious one will cause you to lose faith in Christ.

Only God is to be worshiped (Revelation 19:10). Here, we see that the women bowed down and worshiped Jesus Christ.

God Sends Rain To The Righteous And The Wicked

God sends rain so that people and animals may be blessed by it, producing food and providing water to drink. God provides for the righteous and the wicked, as stated in Matthew 5:45.

The Lord Hurls Our Sins Into The Depth Of The Sea

Whatever you are doing that is going against the Lord Jesus Christ, turn from it in repentance, and He will forgive you. What machine is there that can go to the very heart of the sea? No one can condemn you for what the Lord has forgiven. Once the Lord forgives your sins, no longer will He judge you for them.