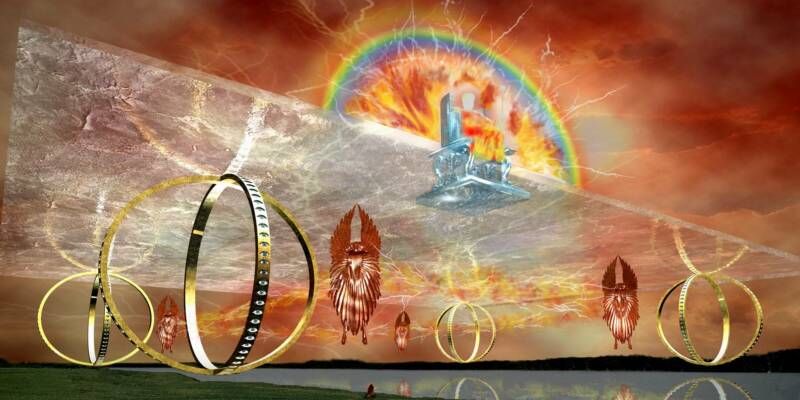 6 Something like a sea of glass, similar to crystal, was also before the throne. Four living creatures covered with eyes in front and in back were in the middle and around the throne.

The phrase “Something like a sea of glass, similar to crystal” means that the floor of glass is as vast as the ocean. Its purpose in God’s throne could be to reflect God’s glory in every direction as the light goes through glass and also gets reflected back out. God’s glory permeates all of heaven.

The four living creatures are called Seraphim and they are constantly in God’s presence giving Him glory and reflecting God’s glory (Isaiah 6:2-3). They have six wings, two to cover their upper body, two to cover their lower body, and two to fly. God’s presence is so powerful that they need to be covered in His presence. God gave them to have eyes all over their wings to see Him and in all different directions. They also have four faces, a man, an ox, a lion, and an eagle. They are very powerful and very fast, they move like lightning and shine with the reflection of God’s glory. Their full description can be found in Ezekiel 1:4-28.

A side note: In Ezekiel 10 they are called Cherubim and the details in chapter 1 of Ezekiel are a little different than that of Isaiah 6 and Revelation 4. It seems that Revelation 4 combines some of Ezekiel’s with Isaiah’s descriptions of the living creatures.

The Seraphim were massively strong and swift, exalted to guard the throne of God, and were majestic beings to reflect God’s glory and His love.

8 Each of the four living creatures had six wings; they were covered with eyes around and inside. Day and night they never stop, saying:
Holy, holy, holy,
Lord God, the Almighty,
who was, who is, and who is coming.

The phrase “Day and night they never stop” refers to a never-ending, praises to the Lord God.

Three holies can refer to the Father, Son, and Holy Spirit.

9 Whenever the living creatures give glory, honor, and thanks to the One seated on the throne, the One who lives forever and ever,

Something always occurs every time that the living creature praises the Living God on His throne which is seen in verse 10.

10 the 24 elders fall down before the One seated on the throne, worship the One who lives forever and ever, cast their crowns before the throne, and say:

Every time that the Seraphim give glory to God the 24 elders who are believers (see notes on Revelation 4:4), they worship the Lord God by casting their crowns towards the Lord. It shows that Jesus Christ is King of kings and Lord of lords.